Recent Facebook Announcements and What They Mean For Your Marketing

By Megan Okonsky Social Media Marketing Jun 28, 2018 Comments Off on Recent Facebook Announcements and What They Mean For Your Marketing 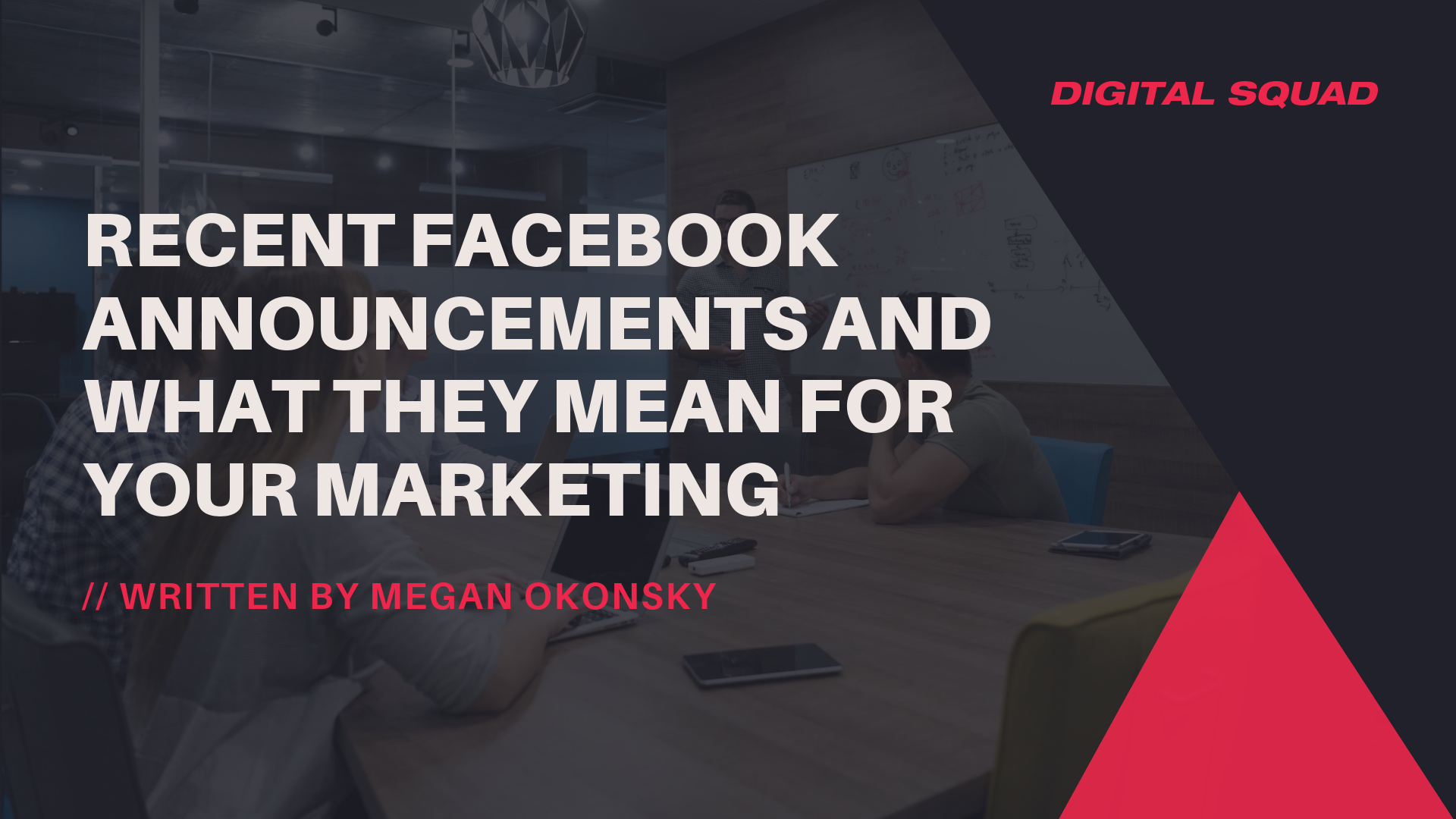 Between the F8 conference in May and individual announcements, the world of Facebook continues to change and develop before our eyes. This year has been a rollercoaster for Facebook; the Cambridge Analytica scandal threatened the trust and membership of millions around the world. (Reports say that 1.8 million Aussies left Facebook after Cambridge Analytica. Two million more have made efforts to change their privacy settings. Yikes.)

Let’s review some of the latest features that Facebook has or is rolling out. Not all of these features will directly affect marketers, but they do give marketers a headstart on understanding how users will interact with Facebook in the future. The value of Facebook marketing has been threatened recently (but we’ll talk more about that, specifically ROI, later in the post,) but even the latest developments that seem threatening could be a blessing in disguise for businesses and marketers.

Let’s start with a fun new feature, shall we?

Facebook is getting into the dating game, and yes, Tinder’s stock plummeted after the announcement. At F8, Facebook announced that it would introduce a feature (separate from the app itself) for singles. Users will be able to make a profile that is visible to non-friends. Facebook will do all the work to match the users up, and then they can message each other in a separate messenger app. (Insert joke about the old “poking” feature here. Everyone else has.)

This is less of an opportunity for marketers than Journeys and the Brand Collabs Manager that we’ll mention below, but it’s certainly one that everyone was talking about after the F8 conference.

Think influencer marketing is just for Instagram or Pinterest? Think again. On Jun 25, Facebook launched a Brand Collabs Manager that allows marketers to search for influencers that have made an impact on your audience. This continues the trend of trying to reach individuals at a personal level. Influencers have built a following of individuals who engage with their content and purchase the items the influencers are selling. Reaching out to influencers on Facebook relieves you of some content-creation duties.

Facebook and Instagram stories are a popular option for users (and marketers) to tell different stories in real-time. During F8, Facebook announced that these stories would become more interactive with the opportunity to post Spotify and Soundcloud tunes, along with GoPro videos, directly to stories. Think Vero, but in a story. Users who see that a Facebook friend was listening to Childish Gambino during the day can head straight to Spotify and listen too. This provides more creative opportunities for influencers, marketers, and businesses to reach customers and bring them into their everyday “story.”

Let’s get to the most exciting features for marketers, shall we?

There have been many questions about the possibly declining ROI of Facebook marketing. What is the value in advertising to customers who are nervous about data collection and privacy intrusions? How will marketers reach the best Facebook users without the more targeted options before Cambridge Analytica? How can we guarantee that the first-party data that is collected is even accurate?

Facebook is addressing marketing and analytics concerns with recent developments to Journeys.

Facebook is a key part of the content marketing journey, but this journey doesn’t start and end with Facebook. Take retargeting, for example. Marketers retarget users after they have completed events on outside websites. A study conducted by Facebook revealed that 40% of adults online started an activity (product research, engagement with a brand) on one device but ended the activity on another. When does this activity end, and how does Facebook influence the conversion?

This is the main question that developments to Journeys wants to answer. Once users reach a certain threshold, Facebook will provide marketers with analytics that show the entire customer journey, from the first interaction to the final conversion. This journey will include actions throughout mobile and desktop, the Facebook app, Facebook messenger, etc. Watching this customer journey will give marketers the ability to measure the ROI of their Facebook efforts and see what touchpoints are necessary to optimise conversion rates. This is an exciting development in Facebook analytics.

Well, this “something” could become a real measurement with possible developments from Facebook. Business Insider predicted recently that Facebook could be developing technology that could identify when users were watching certain television commercials. The technology would pick up on sounds that would then be matched to the content of TV commercials. If the sounds dimmed during the commercial, the technology would even be able to detect users that lowered the volume on the ads and if they walked away.

This connects the journey between different forms of advertising and marketing even further. Businesses currently have the ability to connect the journey that includes Facebook advertisements and content, website visits, and in-store purchases. The ability to connect that to television advertisements provides an even more accurate picture of the customer journey and what influences consumers to convert.

Along with the announcements regarding Journeys developments, Facebook announced that marketers would be able to access more analytics on their mobile devices. It’s not just consumers who are turning more of their attention to mobile. Marketing team members are expected to have access to data and work more than ever. Now they can, straight from a mobile device.

People have the ability to clear their web browser history and clear recent cookies. In the wake of the Cambridge Analytica scandal, Facebook is introducing a similar process for the app. At the F8 conference, Zuckerburg announced that users would be able to clear their history. The aim of Facebook’s “clear history” developments is to build more trust with customers who might have considered leaving Facebook after Cambridge Analytica.

At first glance, this could seem like a roadblock for marketers. Once a user deletes their data, it may be harder to collect it and specifically target individuals as they make their way through the customer journey. With so many businesses investing in Facebook to retarget and reach lower-funnel customers, the “clear history” could erase key data about the customer journey.

Don’t panic. When you think about application and customer acquisition, the “clear history” feature doesn’t seem to be the waste of work that it seems on the surface. Marketers aren’t too worried, and here’s why:

It may not be used by too many users in the first place. Think of how often you actually delete your web browser history. Even if users are introduced to the “clear history” feature in their newsfeeds, they may not actually use it that often. This is not an automatic process.

It keeps Facebook’s customer base intact. Just having this option available could be a relief for many Facebook users. They may not clear their history every day, but the knowledge that they can will keep them on the app longer.

Fresh data? Yes please! The “clear history” feature could actually be a blessing in disguise for marketers. Facebook has been around for quite a while now, and not all data that has been stored on user accounts will still be relevant. Now that Facebook is switching to analytics that focuses on the user rather than the pixel, the “clear history” feature could provide a fresh start for marketers to reach the person behind the data.

If you are marketing an app, you may already be familiar with the Facebook SDK Marketing Kit. One of the challenges faced by app developers within this marketing tool is the ability to track events. Think the Facebook pixel, but with events related to your apps.

Luckily, the wait for specific code to track events doesn’t have to take more than a few seconds. The Codeless App Event Setup was launched at F8 and gives app developers the ability to identify and track specific events with just a few clicks. This feature is only available to app developers who have built their apps through Facebook SDK, but it makes the lives of marketers and developers a whole lot easier.

Cambridge Analytica threatened the power of Facebook marketing, but these recent developments give businesses and marketers better insights as to how consumers use Facebook and other channels to make purchase decisions. Retargeting remains one of the most underrated marketing tactics for increasing conversions. The team at Digital Squad is confident in their ability to use Facebook marketing tools to give their clients and partners more options for advertisements that hit the right customers when they are ready to buy.

Reach out to Digital Squad for more information about adding Facebook marketing to your content and digital marketing strategy. Our efforts extend far beyond Facebook marketing but also other social media marketing Singapore. Whether that’s YouTube advertising, Instagram marketing or other marketing automation efforts.

Megan Okonsky is a copywriter and content marketing specialist with Digital Squad. She is originally from Philadelphia but has landed in Melbourne after traveling for eight months in Southeast Asia and New Zealand. She also teaches vinyasa yoga online.